514 Studios is a gorgeous photography studio that doubles as an event site located in the Minneapolis Warehouse District.

In addition to the giant event space, a sliding door opens up into a prep area.

The “backstage” includes a full kitchen, two refrigerators, and an adorable sitting area, that can be sectioned off and double as a bridal suite on the big day or a place for models to prepare for a photoshoot. 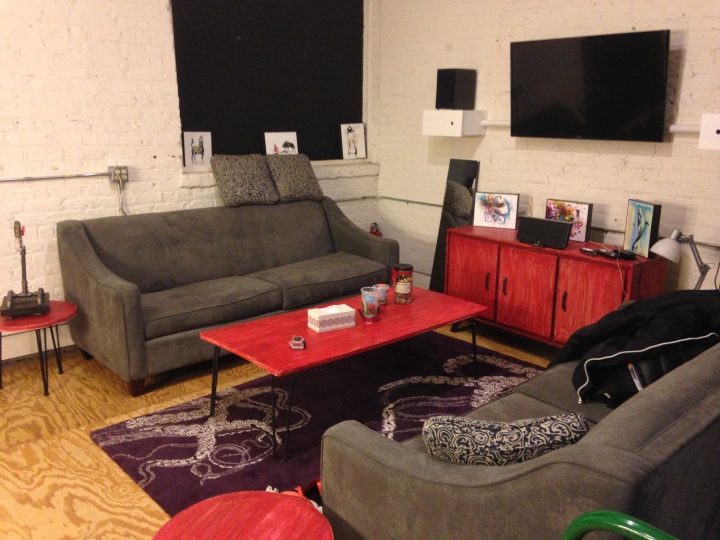 It also features an illuminated mirror, which is a definite bonus.

In addition to the space, 514 allowed us to bring in our own food and beverages, and they offered us the use of their chairs and tables, which cut back on rentals costs.

*Tip: 514 Studios has a list of Food Truck contacts in the Minneapolis area. Because of the garage door that opens up to a back parking lot, Food Trucks are a really fun catering option during the warmer months.

514 Studios is 4 blocks from Target Field, kitty corner from Cuzzy’s and blocks from a variety of restaurants and night spots in the Warehouse District (Smack Shack, The Loop, etc). While they do have a few spots in the back, the majority of the parking is metered on the streets. There are also a few pay lots around the area. As for public transportation, 514 studios is 4 blocks from the Light Rail Station which services both the Blue Line and Green Line. Additionally, there is a bus stop for the #14 route two blocks north of the venue on Washington Avenue and 6th Ave.

Now’s the time to come clean, we did have a little bit of an “in” considering one of the owners, Luke Harper, happens to be one of the Audio Instructors at Minneapolis Media Institute (and immensely talented… which I’m sure he’d want me to point out), but to give you an unbiased view – while we were tearing down later that evening, a couple who had been married at 514 Studios the month prior and who happened to be over at Cuzzy’s (a restaurant located across the parking lot that I’ll be reviewing on Hipster Hack next week, so check back), stopped by to thank Luke once again for how helpful the 514 staff were during their planning process and to gush about the fun their guests had.

If you’re curious how other people have utilized the space, google image search is a good place to start!