After a much needed day to recoup, it’s time to recap the Eaux Claires Music Festival.

The Eaux Claire Music Festival was the lovechild of Justin Vernon, an Eau Claire native, who goes by the moniker Bon Iver, and Aaron Dessner of The National.

“We at Eaux Claires have been driven by the idea that our festival would encourage music-genre-walls to melt away. That the barriers between the stage and the audience altered, and expression and experience put above all. We have put so much thought into who should collaborate at this festival, from musicians to actors, filmmakers to visual artists. We will all share and revel in this collision of artistic force while performing in the arms of our own Chippewa River Valley.” – Justin Vernon 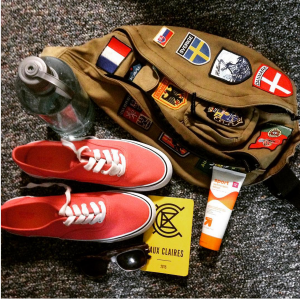 We arrived at the festival at 4pm right when DoomTree was hitting the stage. While we were a little bummed that we weren’t there earlier, we needed the afternoon to caravan from Minneapolis to Eau Claire and set up shop at our “Urban Camping site” aka my friend’s parent’s house.

First impressions: “Wow. I haven’t seen this many yellow school buses since 2004.” (Yes, I just completely dated myself). For the festival this year they did not allow general onsite parking so the main mode of transportation was shuttles, which were strategically set up around town at hotels, campsites, and larger landmarks like UW-Eau Claire and some of the High Schools.

While this shuttle system was genius in the fact that it helped with event congestion for cars, it did pose a bit of a problem for people trying to get to the festival right when it opened- we heard from some insiders that there was a 2 hour wait in line at the venue and that the shuttle lines were so long you couldn’t even see the buses. This also posed a massive problem at the end of the festival, when the music stopped promptly at 11:30, right after Bon Iver’s set and there were thousands of people all trying to leave at the same time. My favorite moment of the entire festival happened when a girl jumped the fence to sneak past the exit line and amidst a chorus of “you’re free!” A guy screams, “REMEMBER US! TELL OUR STORY!” So perfect.

Parking WAS possible, if you were one of the lucky people to score room in a local resident’s driveway or if you were willing to sneak park in a neighborhood and hoof it a bit. We lucked out with a weekend long $30 spot right across from the main entrance sold to us by a nice Santa looking man named Irv, thanks to one of our group scouting out the parking situation the Thursday before. We had a spot specifically reserved for us and were allowed to drink and eat there if we wanted. Probably the most pleasant parking experience imaginable. 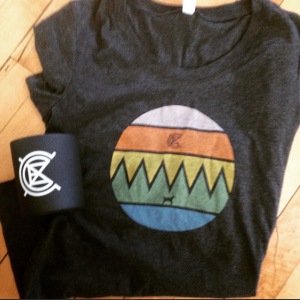 The Merchandise was super cute, but there was only one stand in the whole place right at the beginning gate, which meant that the lines went extremely slow. They also pretty much sold out of everything on day 1, so I suggest in the future making sure to get what you want right away.

*Tip: They did still have some merchandise left up on their website so I just got a shirt yesterday that I was eyeing up. Go check it out.

They had wine for $7, cocktails for $8, and beer for 5-6$. Not too horrible, but definitely not dirt cheap PBR. There were beer tents sprinkled throughout the campgrounds, so it was never too long of a line, which was great, considering they had water fill stations that had huge lines. My plan of attack was usually to buy a beer and drink it while waiting in the water line…

Towards the end of the night most of the stands were out of almost everything, but on Day 2 we went around 4pm and had a pretty decent selection. There were of course multiple cheesecurd stands, mac & cheese stands, nachos, and corndogs/hotdogs, but there was also Toppers Pizza, Thai Food, Pizza, and some sandwich stations.

Overall, the food selection was pretty great and it had a mixture of traditional fair food and great drunk food.  Food ranged from 6-10$ depending on what you were ordering, so again, not too bad.

The coolest part about the Eaux Claires festival was that it was a show put on by artists; both visual and musical.

There were some great installations like the rainbow installation by Hot Tea at the entrance and the lights and windows on the trees that you could see through the paths between stages. And there were also art domes at the Eau Claire stage up top that had performance type art going on.

Now the part that REALLY matters:

There were 44ish musical acts total over the course of the two days, which means that you were forced to make a choice more than once about which show you were going to see and also which shows you were going to cut out early enough of to get to another. Overall, I think they did a phenomenal job of staggering the big acts, however there were a couple that they put on the smaller stage that I think could have been moved, especially based upon the crowd that gathered; I.E. Sylvan Esso.

If you downloaded their free app you were also able to make a personal schedule and received notifications when surprise performances or collaborations happened, which was really cool. A couple times I saw a handful of people start running in the same direction and would check my app to see what was happening, which is actually how we ended up going to Sam Amdion’s “Fa So La Guitarkestra,” which was basically a flashmob singalong. Pretty entertaining. 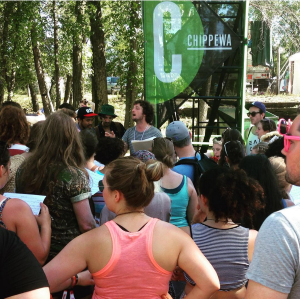 Being from Minneapolis, I’m actually embarrassed to say I’ve never seem Doomtree as a whole perform. They were the first act I saw at Eaux Claires on Friday, which was great. High energy and the crowd was right up there in energy with them, even despite the heat. Check.

I’ve never really been that into Spoon, but a festival like this is definitely the place to go and see them. The crowd was into it and singing along. We did have to leave a little early in order to book it up the hill for Allan Kingdom.

Allan Kingdom was high energy and a great way to keep amp’d up. I was convinced at one point, that his hype man was about to fall off the stage based on how chaotically he was jumping around, however, he remained upright and in fact served to make me dance harder.  The highilght was when he brought Corbin aka Smokey Black on the stage with him to sing their song, “Wavey.” (Excuse my Siri typo on the Vine name). Coincidentally, Corbin was the next act…

Corbin aka Spooky Black is a 17 yr old from St. Paul who became an internet sensation with his homemade music videos and silky smooth voice. Literally, his voice does not belong in this body. While I was absolutely pumped to hear him, his set was a little more low key, so it lost quite a bit of the crowd who headed back down the hill to see Tallest Man On Earth, who was playing at the same time.

There set was absolutely amazing. They were the night 1 headliner and had a really great light show to go along with their set. I was so far back it sort of made pictures not possible, but when they played “About Today,” I danced like an idiot, and when they brought up Justin Vernon and Sufjan Stevens to perform during their encore, I thought the place was going to explode.

Francis And The Lights:

Francis and the Lights was by far my favorite act of the whole weekend. We had originally intended to head up the hill to see Lizzo, but since we have seen her a few times before and had heard amazing things about this guy, we decided to stick around and listen for a couple minutes. A couple minutes quickly turned into the whole set. Francis has the energy of Jerry Lee Lewis, the fashion sense of Prince, the voice of a blues singer, and the synth pop musical stylings of the 80s.

His dance moves were unreal and you spent an equal part laughing and dancing during his set.

After that our intention was to head up to Marijuana Deathsquad, but festival life got to us and we decided to call it a night on a high note.

We arrived right when he was singing and didn’t get to hear too much of it due to our food, beer, and water lines, but his voice was really smooth and I would love to see him again. 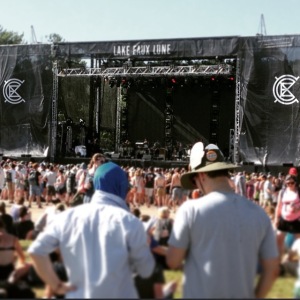 I don’t follow the Givers, so I was excited when I actually recognized a couple of their songs (thank you 89.3 The Current). I really enjoyed their songs, “Up Up Up,” and “Saw You First.” They were great songs to dance around to, even by myself, since my friends had headed up the hill for Melt-Banana.

To say I was excited to see Polica is an understatement. They put on a great show and I was beyond excited to have finally seen them. Seeing her up there jamming with her pregnant belly was also pretty adorable.

This show was crazy packed. It was very obviously the show to go to at this time and it was almost frustrating that you couldn’t see anything. At this point we were also surrounded by people on blankets, because even though it was 90 degrees, the ground was disgusting from the storm Friday night. They put on a great performance and we all laughed pretty hard when Amelia said that she likes to seduce herself in the mirror when she feels not attractive.

His music is just so pure and beautiful. Definitely a great warm up to the main act; Bon Iver.

Bon Iver closed the festival, which is as it should be. Continuing with the collaboration feel and theme of the festival he brought up multiple guest performers with him and did a lot of his classics, as well as some new music, which gives us all hope for a future album.

The Eaux Claires Music Festival was full of great music, art, and just people in general. The midwest, polite, mentality was in full force, and no one really got too out of hand or invaded your space too much during a show. There was even a guy walking around handing out free buttons…how do you say no to that?

Until next year, Eaux Claires!