I had some of the best drinks of my life in Portland. From gluten-free beer to craft cocktails, Portland appears to be a hub of liquid exploration.

I’ll start with cocktails, because they’re my favorite.

Beet Down – The Richmond Bar:

This was a trip favorite. Between the 4 of us we consumed 7 of these in approximately 2 hours. Made with gin, beet juice, lime, and simple syrup, this cocktail tastes like a Christmas themed garden party. My friends, Lisa, Jenna, and Nellie subbed in vodka instead of gin, which really emphasized the beet juice.

The color was a rich red/purple and while they were made incredibly strong, the alcohol wasn’t overpowering. A bonus or a negative depending on how well you handle your alcohol… 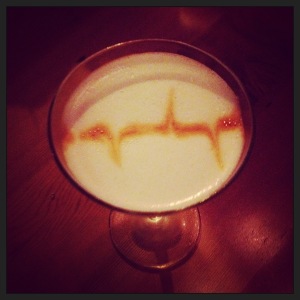 Another cocktail from the Richmond Bar that I tried was the “Czech Mate.” Made with rum, lemon juice, becherovka, egg white, and simple syrup this was a cocktail with an insane amount of heat. The egg white gave the cocktail the consistency of a milkshake and the becherovka (a Czech herbal bitters) added a ginger aftertaste.

It took a few sips to be able to get past the heat of the alcohol, but once you did it was a cocktail worth trying. What I loved most about these two cocktails from The Richmond Bar, is that they seemed to fit the vibe and aesthetic of craft, at-home, cocktails.

This was definitely my favorite bar stop of the trip. 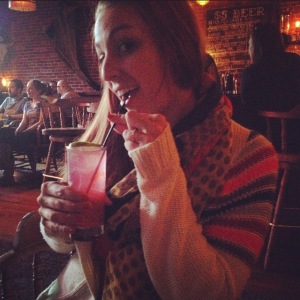 The next cocktail stop we made was the River Pig Saloon. Jenna, above, is graciously modeling the “California Widow,” compiled of vodka, lime juice, raspberry, mint, and soda water.

Basically, this is raspberry John Daly. Refreshing and crisp, just nothing out of the ordinary. 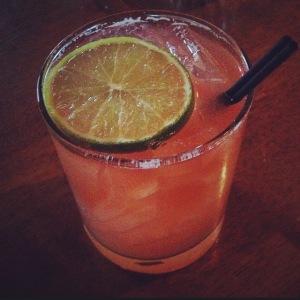 The “Redheaded Stranger” at the River Pig Saloon is composed of vodka, grapefruit juice, ginger, and pear cider. As a cider enthusiast, the pear cider component is what sold me on trying this concoction out. Similar to the “California Widow,” this also tastes like a John Daly, but with a ginger-pear component that adds a surprising touch.

And now for the obligatory selfie:

While Jenna had a Buttered Rum (while she assured me it was delicious, there’s something about the liquid buttery taste that wasn’t enjoyable for me) and Lisa had a Scarlet Fig (delicious), I enjoyed a “Pear’d Together” at the Fireside.

The Pear’d Together is made up of rye whiskey, spiced pear syrup, Becherovka lemon, Martini & Rossi Gran Lusso, and egg white. I was impressed with the presentation of the drink and it was delicious, but it was incredibly strong. If you love whiskey this is something you’ll enjoy, but if you’re a lightweight, this is going to go to your head…quickly.

I tried two different bloody marys while in Portland. I was originally taken aback when I realized they add real salt and not celery salt to theirs, but it ended up being decent. 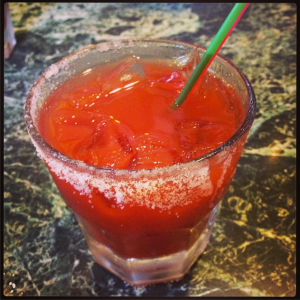 When she originally delivered our bloody mary’s they were garnish-less so she ended up coming back with an entire bucket of pickles for us “just in case….” can’t be mad about that!

The bloody was pretty good. It didn’t have much kick to it, which may have been due to it’s lack of garnish, but the salt was surprisingly “ok,” and Jenna ended up ordering a second. 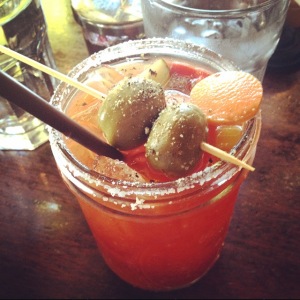 The Besaw’s Bloody Mary had a bit of a kick to it and was full of pickled garnishes. Pickled things tend to be a standard in Portland, but the mix of tomato juice really meshed well. The variety of pickled vegetables depends on the season, but we had carrots in ours, which was surprisingly delicious.

Being mostly gluten free, ciders are my go to beer substitute. I was pleasantly surprised at all the options available in Portland.

Jenna ordered the 2 Towns Ciderhouse Rhubarb Cider while we were at the River Pig Saloon. I’ve never been a huge fan of rhubarb, but I actually didn’t mind it in cider form. 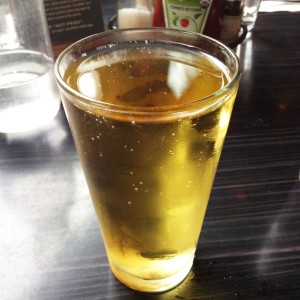 What I loved the most about this cider was that it didn’t have the crisp bite of normal cider. It still had the same great taste, with a smoother palate. 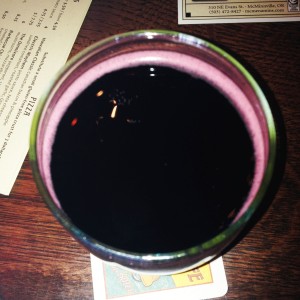 I am in LOVE with this blackberry cider. It’s basically like drinking an alcoholic pom wonderful. The color is amazing, the taste is both tart and fruity, and it lacks the acid aftertaste.

We went to two specific brewery destinations while in Portland and were very pleased with not only the quality, but the service and atmosphere. 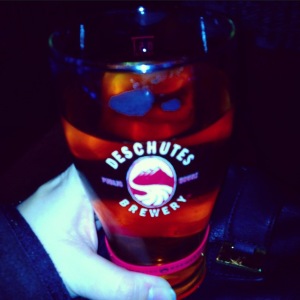 Being mostly gluten free, it’s actually sort of shameful to admit that I’ve actually never tried a gluten-free beer before. I’m an avid fan of ciders, but the gluten free options in Minneapolis haven’t seemed like viable options when a normal beer is available. So when we went to Deschutes Brew Pub in Portland and I saw that they had a GF Northwest Pale Ale on tap, I figured, there was no better time than the present to try a brewery crafted gluten free beer.

You, honestly, couldn’t tell that it was gluten free. Even though it’s made with rice flour, It tasted like any other Pale Ale I’ve had. There’s just enough of a honey aftertaste to make it stand out. 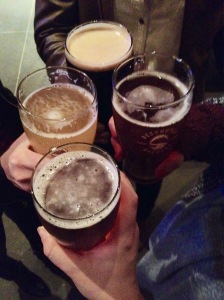 While we were at Deschute’s it was actually National Stout Day, so the Nitro Obsidian Stout became a quick favorite of the other three.

Because of my affinity for the LSD at Indeed Brewing Company in NE Minneapolis, I decided to select the beer with the same initials- thus I ordered the Lompoc Special Draft. I really enjoyed the chocolate undertones.

After doing a taste test of Lisa, Nellie, and Jenna’s picks, the Stout Out Loud, was definitely my favorite.

Unfortunately, I don’t remember and/or have photos of all the drinks that Lisa, Nellie, and Jenna tried, otherwise this blog would be 3 times longer (in retrospect it’s probably fortunate, because my fingers are getting tired). I was very pleased with the variety and the quality of drinks served in Portland.

I’d say the best district for us to experiment in ended up being the Pearl District. So if you’re into craft drinks I suggest making sure you devote some serious time to that area.

4 thoughts on “Drunk in Portland”