I get it. Hudson is a little far out there, but trust me on this one!

Full Disclosure: I’ve spent more time eating (and “drinking wisconsinbly”) at Agave Kitchen than any other restaurant in the Twin Cities. Yes, the food is good, but the real reason for me is because I love being able to go there to spend time with my sister who is Agave Kitchen’s General Manager. A few times a week you can also find Andrea behind the bar slinging mojitos and screaming “SEE YOU TOMORROW” at guests who are leaving haha… So yeah, full disclosure: I know many of the people who work there because they are my sister’s 2nd family, but I am not getting any kick backs for writing this Hipster Hack (not saying I didn’t try, just saying it didn’t happen…hahaha just kidding).

My sister has been working at Agave for somewhere around 9(?) years so it’s safe to say I’ve tried a LOT of their food. Originally I used to go there when I was in my mid 20s as a loophole, because if your sister is the bartender you’re not eating and drinking alone, right? RIGHT?! However, their keto menu is the star of this Hipster Hack.

It has been a strugglefest to find places to go out to eat that are actually affordable (aka not a steak house) and have keto food options other than a bunless burger and a side salad. Agave Kitchen has a whole keto friendly subset to their menu AND they have keto monthly features like the lobster mac & cheese you’ll see below (made with cauliflower rice). If you’re keto, this definitely makes it worth the 30 minute drive for a date night! 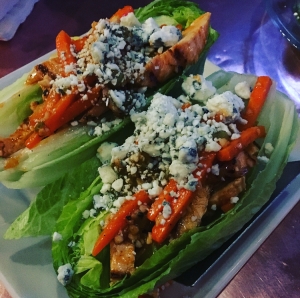 I miss tacos so much. While I’ve tried other lettuce wraps, most of them miss that crunch of a real hard shell taco. These lettuce wraps have such a crunch to them and they are packed with so much flavor. 4 stars. 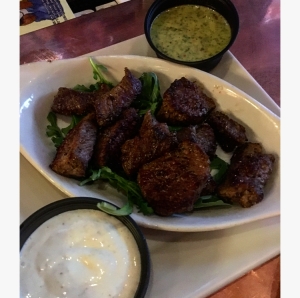 These aren’t on the keto specific menu at Agave, but having had really lackluster ones at Bonfire in Woodbury, I absolutely had to order these so my boyfriend could understand how they should taste. The best appetizer option out there for keto by far and flavored to perfection.

I was excited when Tom decided to order the lobster Mac ‘n Cheese, because I LOVE lobster mac, but I had already had Agave’s keto bacon mac ‘n cheese monthly feature and I wanted to try something different. Dating me comes with non-negotiables like allowing me to try your food haha so I was excited to still be able to steal a few bites. I’ll be honest, cauliflower mac ‘n cheese isn’t my favorite. I’m not a huge cauliflower person and you can definitely still taste that it’s cauliflower, but served with the cheese and bacon and lobster….yum. 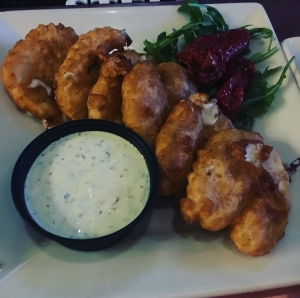 Ok, these ones aren’t “keto,” but Andrea let me know that they make them “lightly breaded” so I wouldn’t have to feel as bad as I would eating the usual ones. Good on macros = good to go!

Like I said, I’ve tried a lot of different foods over the years so it would be a miss to not share some of my favorites!

The Chimichanga is an Agave Kitchen staple. You can get either chicken asada or pork carnitas and it is covered in their signature laredo ranch…I could drink that stuff. 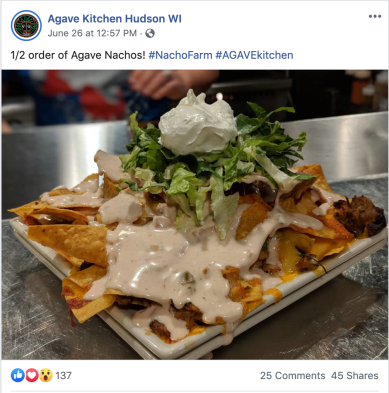 The Agave nachos are truly massive. Even the half order is hard to finish. Topped in laredo ranch you can also choose between pulled pork carnitas or chicken asada. 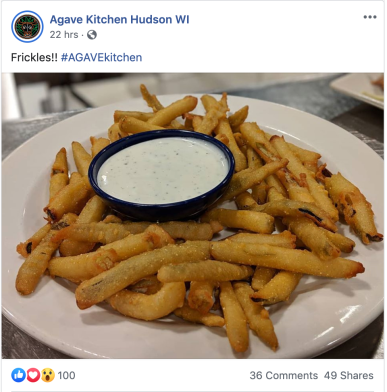 Frickles are deep fried pickle deliciousness. I’m all about this life.

Lastly (and not pictured) my absolute favorite burger is the Old Dutch. It has white cheddar, sour cream AND dill pickle chips on it. YUM. The great part about their burger menu is you can actually get it on a chicken breast, turkey burger, or a black bean burger and you can sub a gluten free burger, too! They really do cater to a lot of different food preferences. 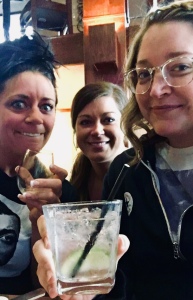 They have some really delicious specialty cocktails and monthly features as well as a full bar, a variety of infused vodkas, a range of tequilas (obviously), and the Wisconsin beer of choice: Spotted Cow.

You can also never go wrong with a vodka + soda!

It’s never surprising to me when Hudson gets brought up in conversation and I mention Agave Kitchen that the person I’m talking to has been there. Hudson isn’t exactly a culinary destination, but Agave is and their staff has a lot to do with that.

Not only are they there to serve their customers, but their owner Paul Rode, has cultivated an environment of giving back to their community. In 2017 Agave Kitchen received the Volunteer of the Year Award from the Hudson Chamber of Commerce for the disaster relief efforts organized by Paul. Also, on a more personal note, last fall a group of us (my sisters, neicephews, and I, along with two other Agave employees, Sascha & Sam) were, with the help of Agave Kitchen’s kitchen (ha), able to serve lunch at the Franklin Hiawatha Encampment for the residents who were living in tents while waiting for permanent housing to become available. My sister never ceases to amaze me by how giving she is, but I don’t know many restaurants or local businesses willing to go to the extremes for their community like Agave.

If you’re looking for a date night destination or maybe to take a short day trip a little bit out of the city, I would definitely recommend heading Agave’s way and hitting up some of the patios in the area!