I lucked out growing up near Vali-Hi Drive-In. It was literally only a 10 minute drive for me unlike many people who have to make the drive in a destination, it was pretty standard for my friends and I to go and watch a couple movies and then rush home before curfew.

For $9.50 you can watch 3 movies starting at dusk. Majority of the people leave after the 2nd movie, because by then it’s already close to 1am, but that cost does cover 3 movies!

We just recently went to celebrate our friend, Nellie’s Birthday and I have to say it was funny to see how we “tailgate” now compared to as teenagers. As teenagers we just threw sleeping bags into our cars and grabbed lawnchairs. As adults, my friends brought their SUVs and took the time to make the backs of their cars into beds: 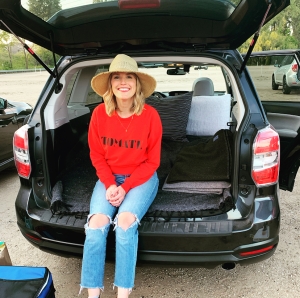 As teenagers our tailgate food used to be chips, popcorn, and maybe hotdogs if we wanted to grill ahead of time. Into adulthood, we had a legitimate cheese and cracker and dips spread: 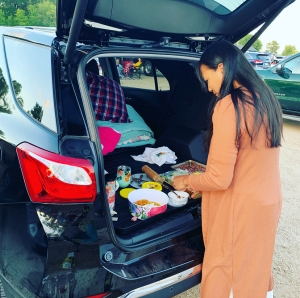 I gotta say, I like the adult version much better haha 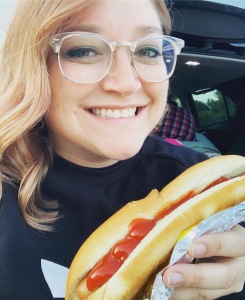 There is a concession stand that sells a variety of movie snacks as well as Jack Pizzas, burgers, nachos, fries, chicken strips, and also hotdogs. I recommend getting the $1 hotdog, which I did NOT do here, because I made the rookie mistake of grabbing the first hotdog I saw, which was the footlong. Insider Tip: You can literally get 3 dollar hotdogs for the price of the footlong. Much better value. 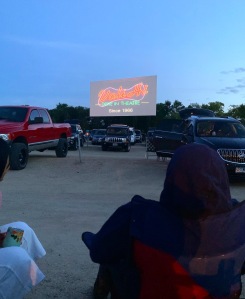 They only accept cash everywhere (including the entrance) so be sure to stop at the ATM ahead of time. There is an ATM available, but since you need cash to get in, it’s better to stop ahead of time.

It gets cold, so be sure you bring blankets, even in the middle of summer.

Bring a radio, especially if you’re going to be sitting outside of the car.

The bathrooms aren’t the best, but they do have port-a-potties as well as actual bathrooms, so the best times to go are a few minutes before the movie ends or wait about 10 minutes after.

Don’t be that person that shows up after the movie starts and drives around with their headlights on blinding everyone. It’s so rude. Gates open quite a bit before dusk so you should not have an issue getting there on time. A car driving around is the equivalent of being in a movie theater and people start asking during the movie if the seats in between you are taken. We all hate you.