Recently two of my favorites, Brad & Lisa, decided to make their relationship legal so our friend, Nicole, organized an engagement party for them at Eat Street Social. Nicole had a pretty hard time finding a restaurant that could accommodate our party of 20, so when she called Eat Street she was extremely pleased that the manager, Jaren, not only went above and beyond to help us make this engagement party a possibility, but also organized our use of “The Torpedo Room,” event space. 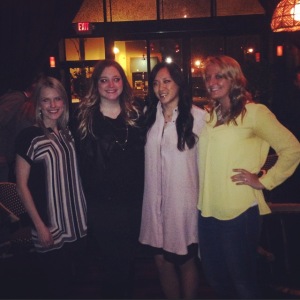 The Torpedo Room was a great intimate space for us, because it offers the same type of vibe as the restaurant, but we had the mobility that makes it so much easier for a newly engaged couple to talk to all of their family and friends. Besides the beautiful table set up, we also had additional seating; couches, side tables and chairs, and a tiki bar!

Queen of the Dragons:

I’m a little Game of Thrones obsessed, so I made the choice quickly that this was the drink for me. Crafted with Vodka, Austrian Rose’, grapefruit, Jamaican #1 Bitters, and CO2, it had heat, but the alcohol wasn’t too overpowering.

Eye of the Beholder:

Nicole insisted I order one of these after she fell in love with it. Made of Spiced rum, Old Port Rum, lemon, cinnamon syrup, sparkling wine, and bitters, this would normally not be my forte, because of my intolerance to cinnamon, due to my misguided attempt and near death experience doing the Cinnamon challenge in college, but I have a love affair with rum, so this was definitely worth ordering.

Our waiter, who was absolutely fantastic, made sure to point out the “Thunder Gun” to our end of the table after Nicole had mentioned wanting to thank the chefs for such a great meal and after purchasing, we collectively decided that it was the best 12$ any of us have ever spent.

The Thundergun: For $12 your table can go into the kitchen and watch the chefs shotgun a case of PBR. I realize that most people would not see the benefit in this. I mean, effectively you’re paying to watch someone else shotgun a beer, but trust me it’s worth it. You can, like we did, also pay a little extra to partake, because we wanted the bride and groom to do one, obviously! First your group walks into the kitchen, which is pretty small, so we maxed out at 6 people, which was great, considering that’s how many we had. Then while you’re walking into the kitchen you’re feeling pretty good about yourself, because you’re thinking you’re doing a nice thing for the chefs, and they’re all hollering and singing and playing maracas and quickly you go from thinking this is something for them, to feeling really great about what they’re doing for YOU…these guys are good! So not only are you hanging out in the kitchen with some dude’s who are insanely fast at shotgunning, but you’re leaving the kitchen feeling great!

Questions we came out of the experience with:

I’ll keep you updated as I find the answers…you can check out the video Nellie took below!

At our waiter’s suggestion, I, along with the majority of the table, ordered the Eat Street Burger. Made with smoked gouda, onion marmalade, and preserved tomato, this was one of the best burger flavor combinations I’ve ever eaten. The fries were also cooked to perfection and served in the most adorable little fry cauldron!

My absolute favorite part of the meal though, was the Braised Leek Wild Mushroom Soup. This was by far the best soup I’ve ever had in my life. Creamy and with just the right amount of mushroom, I was definitely tempted to order a second bowl of this. If you’re looking for something besides the burger, I can also recommend the pork chop. Tim had ordered the pork chop and was nice enough to share it with our end of the table and we were all impressed with how flawlessly it was prepared. Overall, Eat Street is a little pricey, so expect to pay around 60$ for two people to eat and have cocktails!

As stated before, our waiter was fantastic, the manager, Jaren, was amazing, and the chefs were not only extremely talented, but really fun to be around. However, during dinner a dark horse emerged completely out of nowhere to secure status as the Eat Street Social MVP. Lisa’s mother, Ann, had put up these adorable flags that you can see in the photo above. Unfortunately, while we were sitting down to eat the tape had given way and those very same flags fell into a candle resulting in a fire. Before any of us even noticed we see one of the waiters, out of nowhere, RUNNING across the room and screaming as he starts to put the flames out with his bare hands!

Nicole quickly offered to buy him a shot as payment for you know, saving our lives, and we can now say that we experience dinner and a show at Eat Street Social.