I usually can’t decide what I love more about the Minnesota State Fair; people watching or the food.

With the last weekend of the fair starting today, I wanted to make sure you had my list of fair favorites and new must trys!

*Pro Tip: It’s important to go to the fair with friends and family who are willing to share. The goal is to try everything and that’s just not possible for your wallet or your stomach if you’re not going into it with a team mentality.

I made it to the Minnesota State Fair twice this year, once with my family, once with some friends, and I fully intend to go one last time this weekend. What can I say, I love the fair!

If you’ve never gone to the fair, a good way to get into the spirit is to download a Fair Bingo Card; people watching with a purpose.

My favorite thing to do at the fair is, without a doubt, the cardboard cut-outs. Luckily, my niece and nephew are still willing participants haha 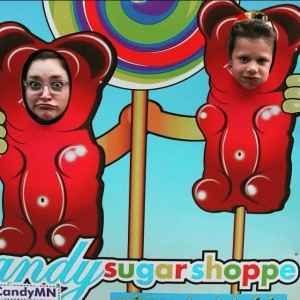 Rides are also a key component of the fair. While they are something I feel like you get less into as you get older, I did finally embraced my inner child and take my maiden voyage on the giant slide compliments of my Mom! Once again, it’s nice to have a niece and nephew to offer justification haha.

The Great Minnesota “Eat” Together, is a right of passage for Minnesotans. Known for it’s fried delicacies on-a-stick, the Minnesota State Fair is a safe, judgement free place to try foods like a deep fried twinkie or deep fried butter (ok, there is judgement on that one, but seriously, that’s disgusting).

This is an outdoor activity staple. It just doesn’t even feel like the fair without the original food on-a-stick. Four stars. 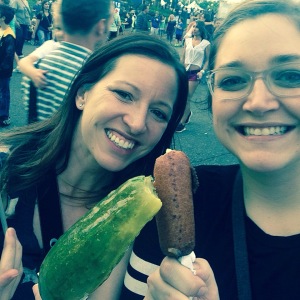 The beauty of food on-a-stick is that it’s convenient to eat on the move. This is a great food to get if you’re hot, because of how crisp and refreshing it is.

The cheesecurd is another midwest staple and go-to fair food. I’ve never been disappointed ordering these. Never.

The Cheese-on-a-stick is my absolute favorite food. It’s essentially a corndog full of cheese, sans hotdog. What’s not to love about this? There’s nothing else in the world that can put a smile like this on a little girl’s face 🙂

The Green Pepper Rings was a stand that piqued my interest, mostly because they had no one there and I felt bad that the teenagers manning the stand looked bored (Minnesota nice at it’s finest).

These were absolutely delicious. Sold as an onion-less onion ring, these were really great dipped in ranch. Expect the same mild heat of a plain green pepper, but in a deep fried love hug and dipped in dreams.

I was hesitant about this one, but since I love green olives I thought it was worth a shot. Green olives with cream cheese, wrapped in bacon, deep fried, and dipped in ranch. Being a big fan of green olives, I was pleased that while the initial taste was definitely breading and bacon, the lingering flavor was olive. If you’re a fan of olives you’ll want to try this.

The Mac & Cheese muffin was on Brad & Lisa’s list and while it was definitely good and tasted like a cornbread, mac & cheese comfort food feast, I was a bigger fan of the Mac & Cheese on-a-stick.

The Mac & Cheese on-a-stick was just overall easier to eat (re: my enthusiasm for foods on a stick) and had a more crisp breading flavor instead of the crumbled dryness of cornbread. 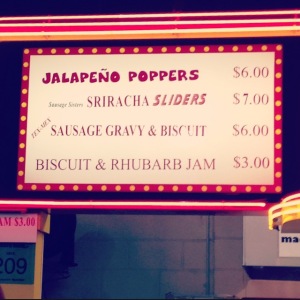 This was one of Lisa’s orders and I forgot to get a picture of it, but it didn’t look any different than a mini hamburger. The flavor did have the sriracha kick. There was heat, but it wasn’t unbearable even with my low spice tolerance! A great pick. 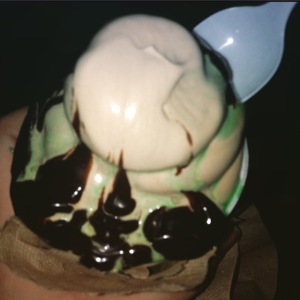 In the smoldering heat, a custard seemed like the natural solution. However, I was so full at that point that it just was not sitting well in my stomach, and because of how hot and humid it was, it started melting instantly and didn’t really offer the cold refreshment I was hoping for. General flavor was great though. Who doesn’t love mint and chocolate?! 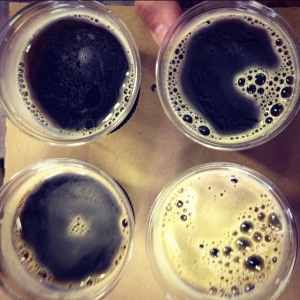 The Minnesota State Fair is the ideal environment for breweries to test out new beers, because fair goers flock to these new flavors.

The “Land of 10,000 Beers” is located in the Horticulture Building and a great place for local brewpubs and breweries to showcase their product by participating in the beer flight offers. There are a few different options, I picked the dark beer flight; Three Hour Tour, Morning Wood, Coffee Bender, and Lost Trout.

My favorite was the Three Hour Tour and my least favorite was the Coffee Bender, but overall I was very happy with my flight choice. Brad and Lisa got the lighter and the hoppier flights. I was excited to know Brad’s flight included Sociable Cider Werks!

Lisa summed it up by saying, “chocolate in beer is just the best thing.” The S’more beer was absolutely delightful. It had hints of chocolate while still maintaining a rich beer flavor. Made by Flat Earth Brewing Co. with Cygnus X-1 Porter and added rye malt, this heavenly beer is paired with a graham cracker rim and almost tastes like cake.

My favorite part was, of course, the marshmallow garnish. I described it to a curious friend as a present you forgot about and got to open the day after Christmas. Having been soaking in the beer it picked up just enough of the flavor without getting too slimy or bloated.

*Tip: while this beer is absolutely delicious, it wasn’t as great warm. So drink fast! (Another reason having friends with you who are willing to share is a good idea!)

Unfortunately, this beer is now added to the very short list of things that bacon does not improve. The beer just tasted fatty and the rim smelled like bacon that had been sitting on the stove all day.  Brad took one for the team and slammed the rest of it when Lisa and I could not drink anymore of it. Once again, teamwork. – Excelsior Brewing Co.

A German wheat brew with spices and served with a giant sourdough pretzel, this Pretzel beer is from Maple Island Brewing and has just a hint of salt. The beertender was such an avid fan of the beer himself, after talking us into the 20oz size, he made us try it in his presence so he could see our reaction. A reaction that I can assure you was pleasantly surprised. Four stars.

Created by Lift Bridge Brewing Co. this beer tastes exactly like a mini donut, down to the sugar rim. While delicious, this beer is also sickly sweet. This beer would be best served in sample cup sizes.

Parking at an event of this magnitude is always an issue. The firs time I went I ended up parking 1.3 miles away and walking. The second time we were able to actually find parking near the fairgrounds, but it was $15. If you have an easy route, I would highly suggest a park & ride or shuttle, which you can find routes for on their website.