I was excited to try a new brunch spot based off a recommendation from one of my coworkers. She loves brunch as much as I do, so when she recommended Harriet Brasserie, I knew it was worth a try! Luckily, I also have some great copilots who were game as well!

I went back & forth with the Crab Benedict and Scones & Gravy, so I was excited when Mikayla ordered the scones so I could try hers and get both…exactly why copilots are key.

It was prepared well, but there were a lot of sauces served with it, which was a little overpowering. I didn’t really know what to concentrate on. Because of that, I don’t think I would reorder it. For $15 it just wasn’t worth it.

The scones were a great substitute for biscuits and the sausage gravy was delicious. I would definitely order this if I end up there again! 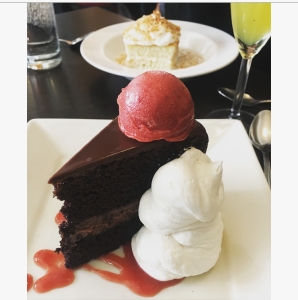 Since we weren’t exactly full after brunch Mikayla and I both ended up getting some dessert (Linnea, was the only one who held out, probably because she ordered pancakes that were more filling).

I started off with a Bellini, because brunch just isn’t brunch without bubbles. I did want to try something else, though, so my next pick was the beer bloody. They do not have a full liquor menu, but you can get some wines and beers.

It tasted fine, but it didn’t have the midwestern garnishes I was used to, so I’d probably withhold from ordering this again.

It’s a smaller place and wasn’t very busy for brunch on a weekend. The server wasn’t very attentive and we had to flag them down to get us another drink. For being such a small place, it was surprising that they weren’t more on top of it.

The place itself was cute and it looks like they have a teatime menu which could be fun, but, unfortunately, I wasn’t overly impressed by the food or service to make it a place that I would visit again.