I wanted to get a Hipster Hack review out about the Smack Shack this week, since Valentine’s Day in just around the corner and according to their website they have a stuffed lobster & champagne pairing going on this Saturday, February 14th. What better way to say “I like you better than anyone else in my life,” than lobster and champagne?

The interesting thing about Smack Shack is that they originated as a Food Truck that specialized in Lobster Rolls. They were also featured on Food Network’s “Diners, Drive-Ins, and Dives,” because of their food truck and as the food service at 1029 Bar.  The actual “Smack Shack” restaurant has only been open since 2013, but it has quickly become a staple of the North Loop dining experience.

I went to dinner at Smack Shack with two friends; Mikayla and Kt, which meant that we were able to try a few different dishes!

Mikayla got the Lobster Roll, which was absolutely delicious. Such a clever idea to make a food as “classy” as lobster, into something as easy as a sandwich. Made with Lobster Salad, Cucumber & Tarragon on Griddled Milk Bread, it makes total sense why their food truck is as successful as it is.

My confession is that I’ve never really been a huge fan of Lobster, or really of seafood in general. It all has a specific smell and texture, that even when I’ve had it beautifully prepared for me, and pre cracked (thanks again, Jim!) a piece of lobster soaked in butter just never really had the same allure for me as it does for practically everyone else in my life.  The Lobster Grilled Cheese changed my prespective. Made with Taleggio, Fontina, and Asparagus, it was the perfect mixture of land and sea. I loved that the texture was somewhat masked by the sandwich, but that the asparagus, and cheese added to the flavor in a way butter never has.

Kt had the Lobster Mac & Cheese and I think you can kind of get the gist at this point that it was phenomenal. The way they use lobster at the Smack Shack is innovative and makes it easy for patrons, like myself, to step out of their comfort zone to try these classics with a twist.

Cocktails are usually my favorite part about trying a new restaurant, because, well, alcohol is my favorite! Smack Shack has a fun signature cocktail menu. At the waitress’ recommendation I ordered the Pomegranate-Ginger Fizz. Made with Vodka, Pama Liqueur, Domaine de Canton, and Prosecco, it had the right heat and the perfect amount of “fizz.”

I think Mikayla would be disappointed if I didn’t recommend that you sub the vodka for Tito’s Vodka. She’s basically Tito’s #1 fan haha.

Our waitress was super friendly and attentive for how crowded it was. The busser was also really on top of clearing out our plates and topping off our water, almost so much so that it was awkward at times.

Smack Shack has the gorgeous exposed ceilings and large warehouse feel that is pretty standard in the North Loop area. We were extremely lucky to have no reservations, but still get seated when the hostess noticed a 2-top table open. They were also very quick to offer to pull another 2-top over to give us some more room.

Right next to us there was some sort of pull-tab/betting table going on, which was fun to watch. There was also a pretty big crowd there to watch the Minnesota Wild game.

All in all, the Smack Shack was a great first stop on a really fun night out with these two ladies in their matching vests! 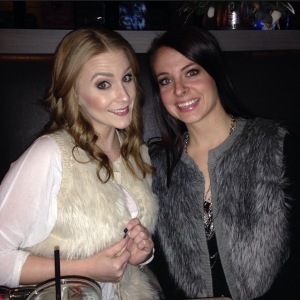